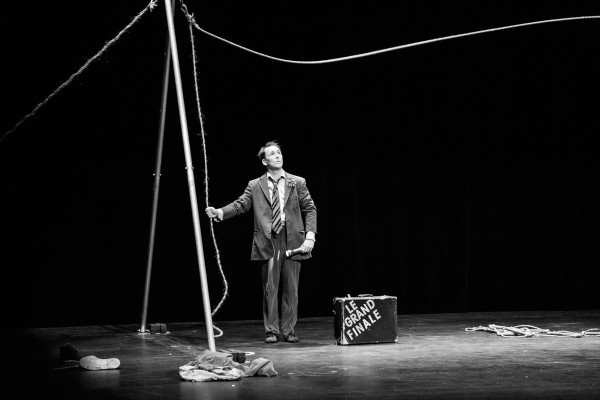 Recognized worldwide for his undeniable talent as an acrobat, juggler and clown, Jamie ADKINS began his career at age 13 in his hometown of San Diego, CA. His path led him to the Pickle Family Circus in San Francisco and later to Cirque Éloize in Montréal (Québec). There, he created his first show TYPO, which received international acclaim from critics and audiences alike.

In 2007 Jamie created his second solo show CIRCUS INCOGNITUS and performed over 1,000 performances in 27 countries. Jamie has travelled with his show in the Americas, Europe, Australia and China. He has participated in many festivals in Hong Kong, Beijing, Shanghai, Macau, Mexico, Italy, New Caledonia and Bermuda. Hundreds of performances were given throughout Canada and the United States.

He has had the honour of performing in such distinguished venues as the Sydney Opera House, the Kennedy Centre and the New Victory Theatre. He played for three weeks at The Edinburgh Fringe Festival in 2014 and had a three-month run at Les Bouffes Parisiens in Paris in 2015. He has been invited at the Lincoln Centre (New York) in 2016. ESPIEGLERIE (A Fool’s Errand), has been presented in its world premiere at the Place des Arts in Montréal and at the Brooklyn Academy of Music (BAM) for the American premiere.

Jamie’s imagination, talent and ingenuity allow him to be much appreciated by his peers and the public. He contributes to the recognition of circus and clowning arts in a manner accessible and appreciated by a wide variety of audiences. He is unquestionably one of the most brilliant artists of his generation.