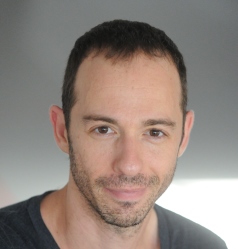 “Contemporary choreographer Hillel KOGAN works at the crossroads of dance and theatre. His pieces combine movement, text and occasional found objects/sounds into a multilayered visual language that intelligently and whimsically navigates itself between subtle and more explicit commentary on the world of dance, popular culture and contemporary society.

KOGAN’s focal points of inquiry are recognizable, almost archetypical, ‘people of dance': contemporary choreographers struggling with the creative process (WHAT NOW), dancers reflecting on dance (DANCER IS THE ANSWER), an Arab dancer and symbolic ‘Other’ in an ‘Israeli’ dance piece (WE LOVE ARABS), and a ‘swan-like’ young female dancer working with a mature male choreographer (THE SWAN AND THE PIMP). These ‘Everymen’ (or women) move and think in the present while constantly encountering their danced heritage and various cultural icons – be it Jazz music, Hummus, the Star of David or Baguettes.

These artifacts serve KOGAN’s practice of uncovering the ideological within the aesthetic, acknowledging hierarchies of age, gender and ethnicity that exist, and eventually dominate, the realms of dance and culture. These systems of power are used – and abused – in the works, only to be deconstructed through theatrical and literary mechanisms, such as irony and parody, estrangement and intertextuality, in order to question their validity as standards and criteria for dancing, and creating, in present times.

Consequently, Hillel KOGAN’s works expose dance as not only an artistic language, but a locus for constructing meaning, defining categories and establishing norms, within which the dancing body – always conflicted in one way or another – raises, in its very presence, reflections on what is considered proper, beautiful, cool, interesting – in dance and society.

This unique form of danced-discourse that KOGAN has developed embodies his self-reflexive position, best described as metadance: the exploration of identifiable artistic codes, visual images or theatrical conventions as a channel for critical contemplation on the craft of the choreographer, the nuances of the creative process, and the relationship between performance and spectator – always based on traditional, more orthodox, expectations.”

Hillel KOGAN is an award-winning choreographer, dancer, dramaturge and teacher, whose work has been performed in venues and festivals all over the world. KOGAN has performed as a guest dancer with Batsheva Dance Company and works as Assistant to Choreographer Ohad NAHARIN since 2005, in Batsheva Dance Company in Israel, as well as worldwide. Awards include The Israel Lottery Landau prize (2015), The Israel Critics’ Circle’s Outstanding Choreographer of 2013, and he was named as a Promising Choreographer by the European magazine Tanz in 1999 and 2014. KOGAN is a member of the Israeli Choreographers’ Association since 2009 and was appointed by the Israeli ministry of culture as co-artistic director of the Curtain Up Festival in 2015 and 2016. He collaborates with various choreographers in the Israeli independent dance scene. He works internationally as a teacher in Gaga movement language, repertoire (his own and other’s) and improvisation, and has taught at companies such as Norway’s Carte Blanche, Gauthier Dance in Germany, IT Danza in Spain, and more.

In 2018, he was invited to create a piece for Ballet du Capitole in France (performed in Theatre Garonne and Montpellier Danse festival). His latest pieces are WE LOVE ARABS, THE SWAN AND THE PIMP, THE RITE OF SPRING and OBSCENE GESTURE.

WHAT NOW (2019) is the third chapter in a trilogy of ars poetica duets on dance, aesthetics and ethics. The piece will be presented at the INTERNATIONAL EXPOSURE, Suzanne Dellal Center TEL AVIV, DECEMBER 6th, 2019